I had a client that put well over 100k into a chinchilla farm.  I had another client throw real money to buy Ostrich eggs and had a friend sink money into a 'B' movie and of course, I had many clients lose all their money buying into sure things on the pink sheets, OTC bulletin board, private placements and Canadian Venture Exchange.

The commonality is obviously stupidity but besides that, the real monitary cost is hard to measure.

Sure you can look at whatever your investment was and write it off versus gains in another year but its more than that, its what we call opportunity cost which is simply the next best alternative.

So when looking at investments, keep the lost opportunity cost in mind.

Remember that successful investing has as much to do with not losing money as making money.
Posted by Unknown at 1:49 PM No comments:

Can You Avoid The Next Financial Bubble? 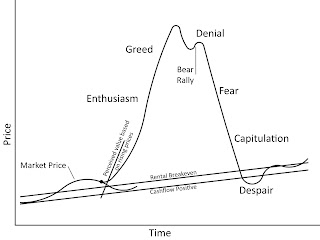 Financial bubbles are as old as finance itself.  Examples include 1860's railroads (when people bought land anywhere just hoping the expanding railroads would buy them out), early 1900's car companies (more than a thousand went bankrupt and a handful survive).  More recent examples include 1980's Japan, 1999 Internet, 2006 Housing and 2011 Gold?

The trick is to identify a bubble and not participate because while the idea of a fast buck is appealing, the downside is worse.

Remember the secret to making money in any market is not to lose money, your gains will come over time but losing is hard to overcome.

If I double my money this year and give back 50% nest year, I didn't get anywhere, took on alot of risk and all for nothing and likely missed out on a real opportunity (we call that opportunity cost).

Most bubbles take on the form of the chart you see here when normal assets take on a life of their own and become something you must own ONLY because it has to go higher, right?  wrong!

If you stick to a boring old investment strategy of adding to an index fund on a regular basis and putting any extra cash into paying down the mortgage (aside from six months of cash for emergencies) then you are likely to avoid all bubbles simply because you are disciplined and don't have silly cash around to participate.  Good for you.

As an aside, I am not a prognosticator but I am willing to say that gold is in the bear rally part of the chart there and has already seen its best days.
Posted by Unknown at 12:46 PM No comments:

A Must Read For All Investors

The information found on this blog or related website is provided and intended for informational and entertainment purposes only and does not constitute financial, legal, or advice of any kind. The information contained on this blog is aimed at a general audience, and does not attempt to offer specific advice to your circumstances. Under no circumstance whatsoever do these posts, opinions, charts, or any other information represent a recommendation or personalized investment, tax, or financial planning advice. Money, Finance and Investing LLC expresslydisclaims all liability in respect to actions taken based on any or all of the information provided.